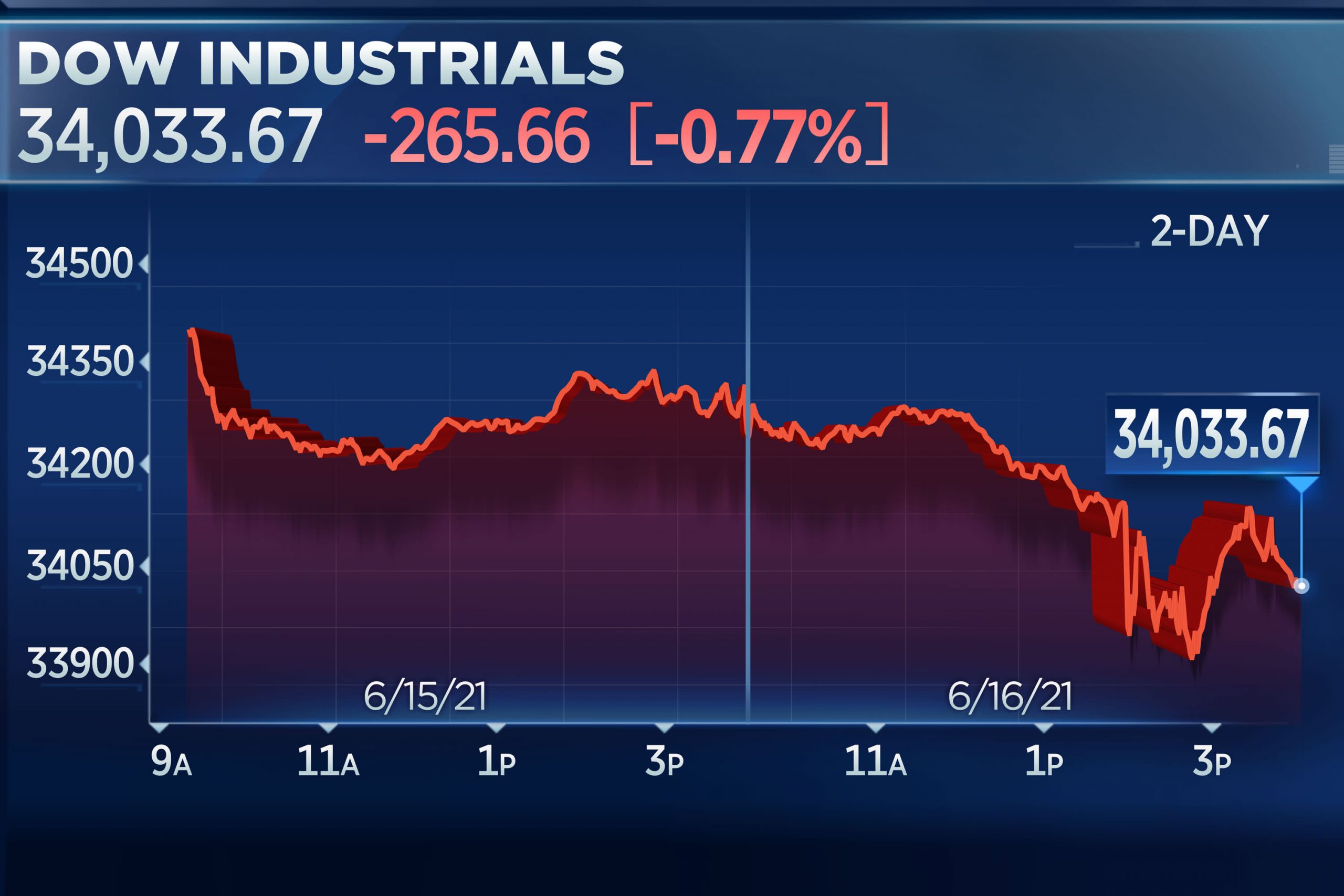 U.S. stocks dropped Wednesday after the Federal Reserve raised its inflation expectations and moved up the time frame on when it will next hike interest rates.

The policymaking Federal Open Market Committee indicated that rate hikes could come as soon as 2023, after signaling in March that it saw no increases until beyond that year.

“This is not what the market expected,” said James McCann, Aberdeen Standard Investments’ deputy chief economist. “The Fed is now signaling that rates will need to rise sooner and faster. … This change in stance jars a little with the Fed’s recent claims that the recent spike in inflation is temporary.”

Major equity benchmark traded off their lows of the day after Chairman Jerome Powell said at a news conference that the so-called dot-plot projections that detail members’ forecasts for future rate increases should be taken with a “big grain of salt” and that the liftoff is “well into the future.”

The central bank gave no indication as to when it will begin cutting back on its aggressive bond-buying program, which also helped bolster markets. The Fed has been purchasing $120 billion worth of bonds each month as the economy continues to recover from the coronavirus pandemic.

The Fed chief said the central bank with provide “advanced notice” before announcing its move to taper asset purchases.

“You can think of this meeting that we had as the ‘talking about talking about’ meeting,” Powell said. “In coming meetings, the committee will continue to assess the economy’s progress toward our goals. As we have said, we will provide advance notice before announcing any decision to make changes to our purchases.”

The Fed also raised its headline inflation expectation to 3.4% for 2021, a full percentage point higher than the March projection, but the post-meeting statement continued to say that inflation pressures are “transitory.”

The meeting came as inflation is heating up, with producer prices rising at their fastest annual rate in nearly 11 years during May, a report on Tuesday showed.

Powell said inflation could run hotter than the Fed expected amid the economic recovery.

“As the reopening continues, shifts in demand can be large and rapid and bottlenecks, hiring difficulties and other constraints could continue to limit how quickly supply can adjust, raising the possibility that inflation could turn out to be higher and more persistent than we expect,” Powell said during the news conference.

On Wednesday, China said it will release industrial metals including copper, aluminum and zinc from its national reserves to curb commodity prices. Copper has fallen more than 10% from its record, dipping into correction territory on Tuesday.

Become a citizen of Vanuatu and live a life of peace and luxury.  We can help with that.  We are Trade Board Limited and provide expert services.  Contact us on our website at https://tradeboard.biz.