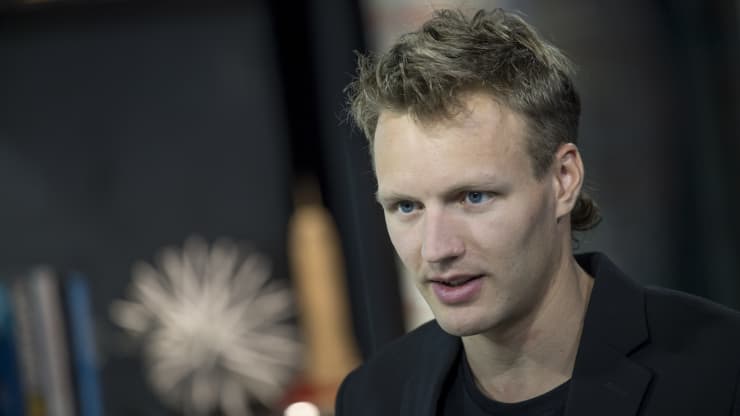 Cryptocurrency exchange Coinbase will go public on Wednesday via a direct listing that’s expected to value the start-up at more than $90 billion when it starts trading this afternoon under the stock ticker “COIN”.

But when Coinbase first launched nine years ago, it hired its very first employee after receiving an enthusiastic, but “annoyingly long” cold email.

And the company paid him in bitcoin.

That email came from Olaf Carlson-Wee, who in 2012 had just graduated from Vassar College with a degree in sociology. He’d written his undergraduate thesis on bitcoin “and the larger implications of open source finance.”

He was also one of Coinbase’s earliest users and he wanted to work there, he said in a 2016 interview with the blog for Y Combinator (the influential tech startup accelerator where Coinbase got its start, and which is an investor in the company).

After becoming employee No. 1 with a job in customer support at the then-fledgling company, for his three years there, Carlson-Wee was paid entirely in bitcoin, according to the Wall Street Journal, with a starting salary of $50,000.

Though it’s unclear how much bitcoin Carlson-Wee currently owns, during that time — from 2013 to 2016 — the price of bitcoin fluctuated dramatically. In early 2013 the price was just over $13 per bitcoin before spiking to more than $1,100 later that year. The cryptocurrency ended 2016 at roughly $1,000 and on Wednesday it was trading at more than $62,000.

(As recently as 2018, roughly 40% of Coinbase employees took at least part of their salary in bitcoin.)

When Carson-Wee sent that cold email, despite attaching his roughly 90-page thesis, he actually heard back from one of Coinbase’s two co-founders, former Goldman Sachs trader Fred Ehrsam, five minutes later with an email asking if Carlson-Wee could “hop on a Skype.”

After talking to Ehrsam on Skype for roughly 20 minutes, Carlson-Wee said the Coinbase co-founder invited him in for an in-person interview in San Francisco (Ehrsam was staying with a friend in nearby Oakland). Ehrsam told Carlson-Wee to prepare a pair of 15-minute presentations: ”‘The first should explain something complicated you know very well. The second should outline your vision for Coinbase,’” Carlson-Wee says he was told.

Carlson-Wee said his first presentation was on “the pharmacological induction of lucid dreams,” noting in 2016 that he had been “writing down my dreams for 11 years.”

As for his strategy for Coinbase, Carlson-Wee said he thought the company should “focus 100% on security,” especially in terms of ensuring that users’ cryptocurrency balances were secure from hackers.

“Bad customer experiences will eventually be forgotten but a security incident will not be forgotten,” Carlson-Wee told Y Combinator. “I was saying to [co-founder Brian Armstrong], ‘We cannot hack something together that ends up leading to a security incident. Even though everything is on fire, let’s do this very carefully.’ And I think that resonated with them.”

After giving his presentations, Carlson-Wee said that Ehrsam gave him “a really brutal mathematics problem” to solve.

Here was the math problem, according to Carlson-Wee: “So there are 100 lockers in a row. They’re all closed, okay? A kid goes by. He opens every single locker. A second kid goes by. Now he closes every other locker, every second locker. Third kid comes by, every third locker. If it’s open, he closes it. If it’s closed, he opens it. Then the fourth kid goes by. Every fourth locker, he changes the state. And now 100 kids go by. What is the state of the lockers after 100 kids go by?”

Carlson-Wee did his best to focus on the problem, because he felt that having the correct answer ready by the time Ehrsam brought fellow co-founder Brian Armstrong in to meet Carlson-Wee would really “seal the deal” and land him a job. Fortunately, he ended up landing on the answer in only about three minutes, realizing that only the lockers that would be open are the ones numbered with “perfect squares” (numbers generated by multiplying two equal numbers, so the 16th locker, the 25th locker, etc).

After that, Carlson-Wee said that Armstrong “grilled me for another hour.”

“Brian’s questions were really intense: ‘What do you wanna do with your life?’ ‘What drives you as a person?’ ‘What’s a belief you have that is extremely unpopular?’ He wanted to really know me,” Carlson-Wee told Y Combinator.

Four days after the interview, Carlson-Wee said that Armstrong and Ehrsam reached out to ask him to complete a paid, two-week work trial.

“I worked really hard because I knew this was the final test. At the end of those two weeks they said, ‘Okay. You have a formal job offer,’” said Carlson-Wee, who joined the company as Coinbase’s first employee and worked on customer support (“Like I said, I came in and was willing to do anything,” he added.)

Carlson-Wee was Coinbase’s sole customer support employee until the company had 250,000 users, he said. He worked for the company for three years, eventually becoming Coinbase’s head of risk.

Coinbase hitting the public market is expected to produce a windfall for people like the company’s billionaire co-founders, CEO Brian Armstrong and Fred Ehrsam, as well as Coinbase’s investors and some past and present employees.

Carlson-Wee left Coinbase in 2016 to launch one of the first-ever crypto hedge funds out of his San Francisco apartment. Called Polychain Capital, the fund manages assets valued at more than $300 million, according to Forbes, and it’s landed investments from Ehrsam as well as venture capital firms like Sequoia Capital and Peter Thiel’s Founders Fund. Carlson-Wee’s fund has invested in crypto startups like blockchain-based social network BitClout and blockchain payments startup Celo.

While it is not clear if Carlson-Wee received any stock in Coinbase as an early employee, he did tell Forbes that he invested in the company in 2017, but has not disclosed the size of that investment.

Meanwhile, despite the markets’ excitement over Coinbase’s direct listing, the company and its founders have not been without controversy in recent years. The New York Times reported last year that Coinbase had underpaid women and Black employees (the company said at the time that Coinbase had “implemented a new compensation program that brought Coinbase in line with some of the world’s most respected technology companies”). In 2020, Armstrong received criticism for actively discouraging Coinbase employees from voicing political opinions, or engaging in activism around political or social issues, in the workplace.

Armstrong, who even offered four- to six-month severance packages to any employees who weren’t comfortable working under such conditions, said in a blog post in September that he believed companies engaging in political discussions and issues publicly “are well intentioned” but he also believes that such corporate activism has “the potential to destroy a lot of value at most companies, both by being a distraction, and by creating internal division.”

Polychain and Coinbase did not immediately respond to CNBC Make It’s requests for comment.