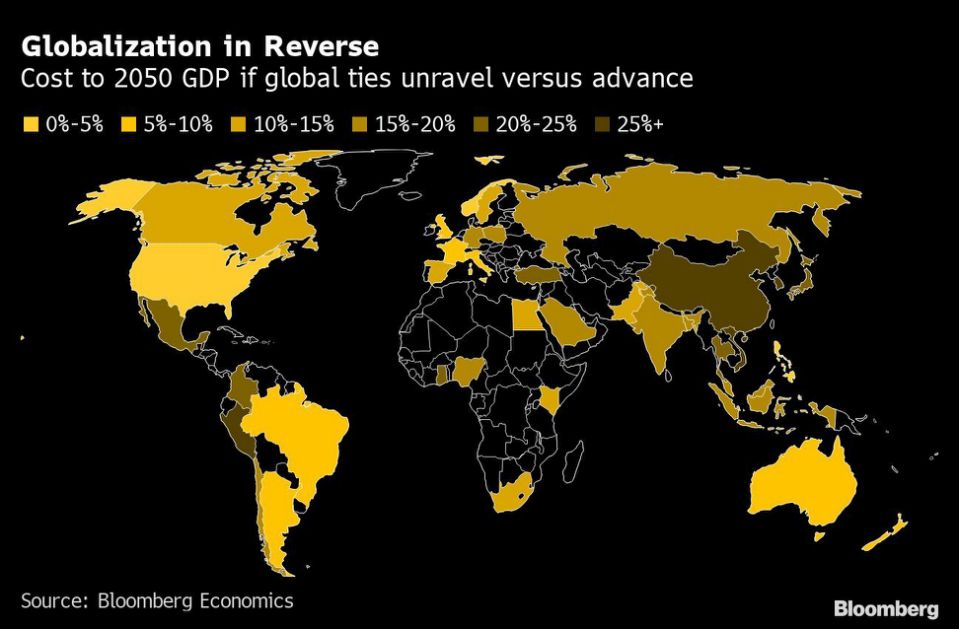 Economic shocks like the coronavirus pandemic of 2020 only arrive once every few generations, and they bring about permanent and far-reaching change.

Measured by output, the world economy is well on the way to recovery from a slump the likes of which barely any of its 7.7 billion people have seen in their lifetimes. Vaccines should accelerate the rebound in 2021. But other legacies of Covid-19 will shape global growth for years to come.

Some are already discernible. The takeover of factory and service jobs by robots will advance, while white-collar workers get to stay home more. There’ll be more inequality between and within countries. Governments will play a larger role in the lives of citizens, spending—and owing—more money. What follows is an overview of some of the transformations under way.

Big government staged a comeback as the social contract between society and the state got rewritten on the fly. It became commonplace for authorities to track where people went and who they met—and to pay their wages when employers couldn’t manage it. In countries where free-market ideas had reigned for decades, safety nets had to be patched up.

To pay for these interventions, the world’s governments ran budget deficits that add up to $11 trillion this year, according to McKinsey & Co. There’s already a debate about how long such spending can continue, and when taxpayers will have to start footing the bill. At least in developed economies, ultralow interest rates and unfazed financial markets don’t point to a near-term crisis.

In the longer run, a big rethink in economics is changing minds about public debt. The new consensus says governments have more room to spend in a low-inflation world, and should use fiscal policy more proactively to drive their economies. Advocates of Modern Monetary Theory say they pioneered those arguments and the mainstream is only now catching up.

All these monetary interventions have created some of the easiest financial conditions in history—and unleashed a frenzy of speculative investment, which has left plenty of analysts worried about moral hazards ahead. But the central-bank policies will be hard to reverse, especially if labor markets remain fractured and companies continue their recent run-up in saving.

And history shows that pandemics depress interest rates for a long time, according to a paper published this year. It found that a quarter-century after the disease struck, rates were typically some 1.5 percentage points lower than they otherwise would have been.

Governments offered credit as a lifeline during the pandemic—and business grabbed it. One result was a surge in corporate debt levels across the developed world. The Bank for International Settlements calculates that nonfinancial companies borrowed a net $3.36 trillion in the first half of 2020.

With revenues plunging in many industries because of lockdowns or consumer caution, and losses eating into business balance sheets, the conditions are in place for a “major corporate solvency crisis,” according to one new report.

Some also see danger in offering too much support for companies, with too little discrimination over who gets it. They say that’s a recipe for creating “zombie firms” that can’t survive in a free market and are only kept alive by state aid—making the whole economy less productive.

The stimulus debate can feel like a first-world luxury. Poor countries lack the resources to protect jobs and businesses—or invest in vaccines—the way wealthier peers have done, and they’ll need to tighten belts sooner or risk currency crises and capital flight.

The World Bank warns that the pandemic is spawning a new generation of poverty and debt turmoil, and the IMF says developing nations risk getting set back by a decade.

Creditor governments in the G-20 have taken some steps to ease the plight of the poorest borrowers, but they’ve been slammed by aid groups for offering only limited debt relief and failing to rope private investors into the plan.

Low-paying work in services, where there’s more face-to-face contact with customers, tended to disappear first as economies locked down. And financial markets, where assets are mostly owned by the rich, came roaring back much faster than job markets.

The upshot has been labeled a “K-shaped recovery.” The virus has widened income or wealth gaps across faultlines of class, race and gender.

Women have been hit disproportionately hard—partly because they’re more likely to work in the industries that struggled, but also because they had to shoulder much of the extra childcare burden as schools closed. In Canada, women’s participation in the labor force fell to the lowest since the mid-1980s.

Rise of the Robots

Covid-19 triggered new concerns about physical contact in industries where social distancing is tough—like retail, hospitality or warehousing. One fix is to replace the humans with robots.

Research suggests that automation often gains ground during a recession. In the pandemic, companies accelerated work on machines that can check guests into hotels, cut salads at restaurants, or collect fees at toll booths. And shopping moved further online.

These innovations will make economies more productive. But they also mean that when it’s safe to go back to work, some jobs just won’t be there. And the longer people stay unemployed, the more their skills can atrophy—something economists call “hysteresis.”

Higher up the income ladder, remote offices suddenly became the norm. One study found that two-thirds of U.S. GDP in May was generated by people working at home. Many companies told employees to stay away from the office well into 2021, and some signaled they’ll make flexible work permanent.

Work-from-home has mostly passed the technology test, giving employers and staff new options. That’s a worry for businesses catering to the old infrastructure of office life, from commercial real estate to food and transportation. It’s a boon for those building a new one: shares in videoconferencing platform Zoom jumped more than six-fold this year.

The option of remote work, along with fear of the virus, also triggered a stampede of urbanites toward the suburbs or countryside—and in some countries, a surge in rural property prices.

Some kinds of travel came to a near halt. Global tourism fell 72% in the year through October, according to the United Nations. McKinsey reckons a quarter of business trips could disappear forever as meetings move online.

With vacations upended and mass events like festivals and concerts called off, the trend among consumers to favor “experiences” over goods has been disrupted. And when activities do resume, they may not be the same. “We still don’t know how concerts are going to be, really,” says Rami Haykal, co-owner of the Elsewhere venue in Brooklyn. “People will be more mindful, I think, of personal space, and avoiding places that are overly packed.”

Travelers may have to carry mandatory health certificates and pass through new kinds of security. Hong Kong based China Tech Global has developed a mobile disinfection booth that it’s trying to sell to airports. Chief Executive Sammy Tsui says it can clear pathogens from the body and clothes in 40 seconds or less. “You feel some cool air on your body, and some mist,” he says. “But you don’t feel wet.”

When Chinese factories shut down early in the pandemic, it sent shock waves through supply chains everywhere—and made businesses and governments reconsider their reliance on the world’s manufacturing powerhouse.

Sweden’s NA-KD.com, for example, is part of a flourishing “fast fashion” retail industry that moves with social media trends rather than the traditional seasons. After deliveries got jammed this year, the company shifted some production from China to Turkey, says Julia Assarsson, head of inbound and customs.

That’s an example of globalization adjusting without retreating. In other areas, the pandemic may encourage politicians who argue that it’s risky to rely on imports of goods vital to national security—as ventilators and masks turned out to be this year.

Before the pandemic, it was mainly environmentalists musing over theories of peak oil—the idea that the rise of electric vehicles could permanently dent the world’s demand for one of the most polluting fossil fuels.

But when 2020 saw planes grounded and people staying home, even oil majors like BP felt a real threat from the world getting serious about climate.

Governments from California to the U.K. announced plans to ban the sale of new gasoline and diesel cars by 2035. And Joe Biden was elected with a promise the U.S. will rejoin the Paris Agreement.

Investors take heed!  Learn all about how much your money will grow if you open a personal or corporate bank account in the United States of America.  Check out the details at #topcompanyformation.com