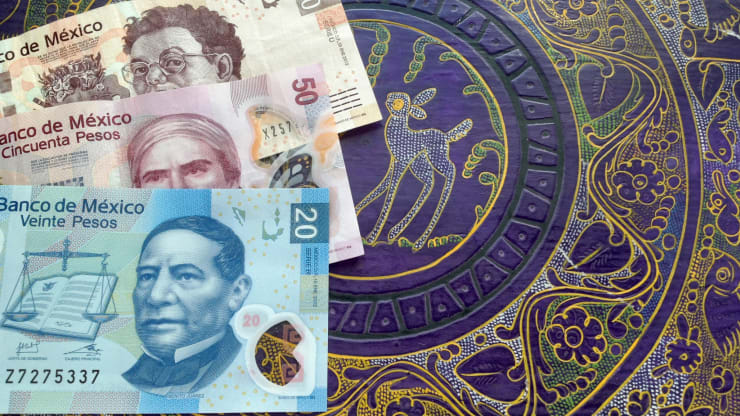 Goldman Sachs has marked out the Mexican peso as its top emerging market (EM) currency pick “once the dust settles” from the coronavirus pandemic.

In a note Thursday, Goldman strategists suggested that while it may be too early to engage with high-yield EM bets, with risks still prevalent and the dollar on the move, it is not too early to start thinking systematically about opportunities once the crisis subsides.

Co-Head of Global Foreign Exchange Kamakshya Trivedi and Head of EM Cross-Asset Research Caesar Maasry, along with a team of strategists, identified the peso as the most attractive among “high cyclical beta, high carry longs.” It was closely followed by the South African rand (ZAR) and Russian ruble (RUB).

A currency carry trade is where investors borrow in a high-yielding currency to fund a trade with a low-yielding currency, aiming to capture the difference between the two rates. Cyclical beta is the currency’s sensitivity to the broader economic cycle and market returns.

“The peso remains our top choice in this group: while it appears to have less ‘room to run’ than some other EM high-yielders, this week’s sell-off means that USD/MXN still stands well over 10% higher than its pre-coronacrisis level of roughly 19,” Trivedi and Maasry said in the note.

“From a medium-run perspective, the peso’s combination of currency-supportive macro fundamentals and still-high yields make it an attractive choice.”

The USD/MXN was hovering at around 22.2 on Friday morning.

Relative to the peso, Goldman analysts suggested that the rand and ruble both have more room to run, with ZAR “deeply undervalued” and RUB having retraced less of its year-to-date sell-off.

“Given signiﬁcant domestic risks, however, including South Africa’s October mid-term budget announcement for the rand, and a combination of still-volatile political headwinds and slowly-fading macroeconomic tailwinds for the ruble, the key question for each currency is whether high global betas can (eventually) trump domestic headwinds,” they said.

However, Goldman is optimistic about this prospect, as the rand is sensitive to Chinese data, which has been suggesting a continued recovery. Trivedi and Maasry suggested that with the U.S. election potentially keeping U.S.-Russia headlines in the spotlight through the first half of the fourth quarter, the “potential for cyclical upside is arguably higher for the rand.”

As of Friday morning, the ruble was changing hands at around 77.57 to the dollar and the rand hovered just below 17.08.

Demographic information can be obtained via your database of existing clients, web analytics and your experience when dealing with potential and existing clients. IDENTIFYING CLIENTS’ NEEDS FOR DIGITAL MARKETING