Warning: "continue" targeting switch is equivalent to "break". Did you mean to use "continue 2"? in /home/cachettrading/public_html/wp-content/plugins/revslider/includes/operations.class.php on line 2851

Warning: "continue" targeting switch is equivalent to "break". Did you mean to use "continue 2"? in /home/cachettrading/public_html/wp-content/plugins/revslider/includes/operations.class.php on line 2855 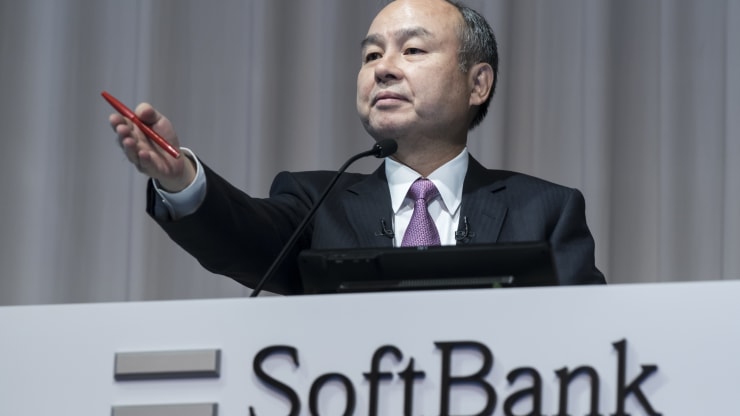 SoftBank loses $12 billion in value on concerns over its big U.S. tech bets

SoftBank shares extended their losses on Wednesday, wiping out over $12 billion in market value this week, amid jitters over the Japanese conglomerate’s latest tech investing strategy.

Shares of the company fell another 3% by Wednesday’s close, leaving SoftBank with a market cap of 11.9 trillion yen ($112.1 billion). That was down sharply from the roughly 13.2 trillion yen ($124.4 billion) SoftBank was worth just three sessions earlier.

The company’s sustained depreciation in value follows a Financial Times report on Friday that suggested, citing unnamed sources, SoftBank was the mystery “Nasdaq whale” buying billions of dollars in call options — which bet on stocks rising.

The report quoted a source saying SoftBank had been snapping up options in major tech names like Tesla, Amazon, Microsoft and Netflix, potentially driving up valuations in the sector.

Last week, tech saw a major reversal amid fears that valuations had reached unsustainable levels. The tech-heavy Nasdaq Composite has now plunged 10% over the past three days, marking the index’s worst three-day stretch since August.

News of SoftBank’s big U.S. tech bets came as a surprise to investors, highlighting a shift in strategy more akin to that of a hedge fund. SoftBank had gained a reputation for its multi-billion-dollar bets on heavily loss-making start-ups such as Uber, WeWork and DoorDash.

Last month, SoftBank CEO Masayoshi Son set up an asset management division to buy stocks in publicly-traded companies. Neil Campling, head of TMT research at Mirabaud Securities, said that move highlighted a more “prudent” approach to financial management, but that the “gamma gamble” from SoftBank on stock options came as a “huge surprise” to investors.

“It’s one thing doing that for a hedge fund, but SoftBank is not a hedge fund and is not supposed to be a hedge fund, so that’s why I think the stock has seen pressure this week so far,” Campling told CNBC’s “Street Signs Europe” on Tuesday. “I think what the market’s telling you is that the strategy is at odds with the communication from the company.”

The focus for investors looking ahead, Campling said, will be SoftBank’s efforts to sell expensive assets like its Arm chip designer unit. Nvidia has reportedly expressed interest in buying Arm.  SoftBank recently built a stake in Nvidia after offloading its holdings entirely last year.  Campling said he expects a deal to take place within the next six to 12 months.

Whether you are interested in how to sell personal photos online or how to sell other kinds of photos, you’d be surprised by the demand that can be found out there, which in turn, can enable you to make a tidy sum off of your efforts.