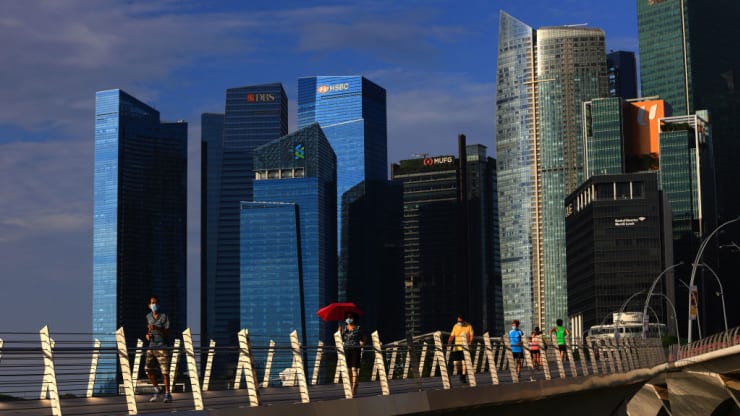 Morgan Stanley is bullish on Singapore stocks and expects 14% returns

Morgan Stanley is bullish on Singapore stocks and expects as much as 14% returns for the MSCI Singapore index over the next 12 months.

In fact, investors could increasingly be looking to Singapore as a safe place to invest in as uncertainty roils the region, the investment bank said.

“We could see inflows supported by a growing of perception of Singapore as a safe haven amid geopolitical and economic uncertainties in the region,” analysts Wilson Ng and Derek Chang wrote in a report last week.

Covid-19 has ravaged economies worldwide, and Asia-Pacific nations have not been spared.

Singapore, a wealthy city state in the region, has unveiled one of the most generous measures to support its economy – four stimulus packages worth 100 billion Singapore dollars, or almost 20% of the country’s GDP.

At the same time, geopolitical tensions have intensified.

Hong Kong’s protests reignited again in May after China approved a national security law said to curtail the Chinese city’s freedoms. The latest demonstrations come after months of protests last year that crippled the territory’s economy.

Singapore and Hong Kong have traditionally been competitors for the status of the top financial hub and wealth center in Asia.

Money has been increasingly flowing into the city state in the past year.

In April, a record amount of money flowed into the city-state’s banks, data from Singapore’s central bank showed.

Deposits from non-residents jumped 44% year-on-year to a record $62.14 billion Singapore dollars ($44.58 billion) in April — the fourth monthly increase and a trend since 2019.

Markets in Singapore also saw more inflows via passive funds, which have been jumping year-on-year, according to data by Morgan Stanley. Passive investing is a strategy where investors buy an index that broadly tracks the market, such as exchange traded funds. It is increasingly popular among investors, as opposed to individual stock picks.

REITs are companies that manage a portfolio of properties such as offices, shopping malls, or hotels. Income generated from those assets, after accounting for fees, is distributed as dividends to shareholders. Investors generally find REITs attractive for their dividend payouts.

“We think the growth of the Singapore REIT market, which led to more representation in benchmarks used by expanding passive real estate and yield focused ETFs, was, and will continue to be, a significant factor driving passive fund inflows,” said the report.

“The perception of Singapore as a safe haven amid the current health crisis and geopolitical uncertainties could drive more high-net worth individuals (HNWIs) to allocate more of their wealth in the country.”

The overall rise in capital inflows “could spill over” into local markets and further drive up demand, Morgan Stanley said.

Valuations for Singapore stocks have bottomed, says Morgan Stanley, but it says that a “sustained rebound is underway.”

“High and sustainable dividends” are what differentiates Singapore stocks from other markets, it said.

Here are five stocks that Morgan Stanley predicted will have sustainable dividends, and which fit the theme of cyclical recovery:

Many people earn money online and you can too. If you are interested in online backup reviews and making money from posting online reviews then you should look at The Online Publishers “TOP” platform to help you start doing that.