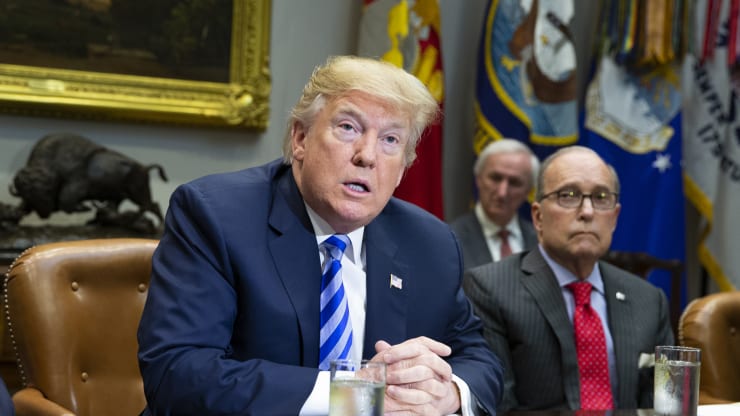 It works like a charm — every time the Trump administration touts positive development on trade with China, stocks spike.
The Dow Jones Industrial Average surged more than 150 points to a new all-time high on Friday after White House economic advisor Larry Kudlow said the two countries were “getting close” to reaching a trade deal.

The stock market has moved on virtually every U.S.-China trade headline for nearly two years. Kudlow, in particular, has signaled encouraging progress on China trade numerous times this year, spurring investors to be optimistic only to watch the two sides take one step forward, two steps back. The trade talks have led to nothing concrete so far.
On Feb. 28, Kudlow claimed trade talks made “fantastic” progress.
On April 3, Kudlow said “good headway” was made, adding the U.S. and China will “get closer” to a deal as talks resume.
On Oct. 4, Kudlow predicted there could be some “positive surprises” out of the most recent round of China trade talks.
On Oct. 11, Trump said the U.S. has come to a substantial phase one deal with China.
On Oct. 17, Kudlow said there’s a “lot of momentum” to finish a trade deal.
On Oct. 18, Trump said he hopes U.S.-China trade deal will be signed by mid-November.
On Oct. 21, Trump said the U.S.-China trade deal is coming along “very well.”
On Nov. 8, Trump said the U.S. and China are close to an agreement.
On Nov. 14, Kudlow said the two countries were “getting close” to reaching a trade deal.
The two sides did make some progress in the bitter trade war recently. In early October, Trump said the two nations have agreed to work up a “phase one” trade deal that includes a pause in tariff escalation and more agriculture buying from China. However, China is insisting on a removal of the existing duties in place as part of the deal, which Trump said he had not approved.
Nonetheless, the optimism has lifted the market to record highs. Major stock averages — the S&P 500, Dow and the Nasdaq Composite — all scored new records in the past couple of weeks. Investors have learned to become more skeptical of the upbeat tone from the Trump administration after a fruitless battle of 18 months, but given the popularity of algorithmic trading, the market has become highly sensitive to every headline.
“We’re finally ‘close’ to a trade deal with China … according to several senior members of the Trump administration!!!! Wait a minute, wasn’t what they said a week ago … two weeks ago … three weeks ago … etc.? In fact, isn’t that what they said about a much bigger deal back in late April???” Matthew Maley, chief market strategist at Miller Tabak, said in a note on Friday.
“Actually, with the impact of today’s algos, it wouldn’t surprise us if we got an initial pop in the stock market, but we seriously question the sustainability of that kind of rally,” Maley added.

For those interested in taking advantage of the visa-free policy, it should be carefully noted that the initiative applies only to international transits, i.e. passengers holding connecting tickets to a third country or region.

Getting Paid For Starting As An Online Reviewer.

How TOP Helps With Finding Clients For Making Money Online With Social Media.

The Use of Demographics and Psychographics in Digital Marketing.

Earning From Your Social Media By Becoming A TOP Trender.

4 Benefits For Online Advertisers Who Join With TOP

How Advertisers Can Get More Out Of A Site With TOP.