Latest Blogs
Home TRADING Boeing is ‘not out of the woods’ and is much riskier than Caterpillar, trader says 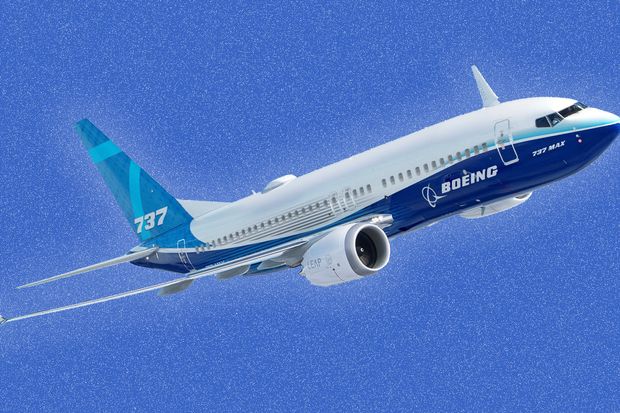 Boeing is ‘not out of the woods’ and is much riskier than Caterpillar, trader says

It was a tale of two industrials.

Wall Street got a flood of earnings reports Wednesday, including those of machinery giant Caterpillar and beleaguered airplane manufacturer Boeing. Shares of Caterpillar initially plunged while Boeing shares popped, but the two stocks ended the trading day on a less drastic note, up about 1% each.

Experts see much more risk ahead for one stock than the other.

“Boeing is not out of the woods,” Gina Sanchez, founder and CEO at Chantico Global, told CNBC’s “Trading Nation” on Wednesday. “They have, actually, a few things that could still act on their stock negatively more than positively at the moment.”

While both stocks appear to be “largely trendless” to Sanchez, Boeing’s 737 Max issues and exposure to the U.S. trade dispute with the European Union pose an outsized threat to its stock, she said.

“Boeing … has a lot more event risk,” she said. “You basically have not only the issues with the 737 Max, which have been really continuing to plague Boeing, but remember that Boeing is also at the knife’s edge of a tariff tiff between the U.S. and the EU, and the Boeing-Airbus WTO announcement basically will probably result in a retaliation by the EU.”

The World Trade Organization earlier this month ruled in favor of U.S. allegations that European countries had granted illegal subsidies to Airbus. The ruling paved the way for tariffs on $7.5 billion worth of EU goods.

Add to that the seemingly weakening economic layout, and this environment doesn’t bode well for Boeing or Caterpillar, Sanchez said.

“I think the general story is, ‘Hey, we’re going into a downturn. These kinds of stocks tend to go down with it.’ But if you have added momentum to that downturn, then I would really stay away,” she said. “So, I think Boeing is the really more negative story of the two.”

“Really, the key level for this is going to be 320, the most recent lows,” Newton said in the same “Trading Nation” interview, pointing to a long-term chart of the stock. The stock closed Wednesday at $340.50. 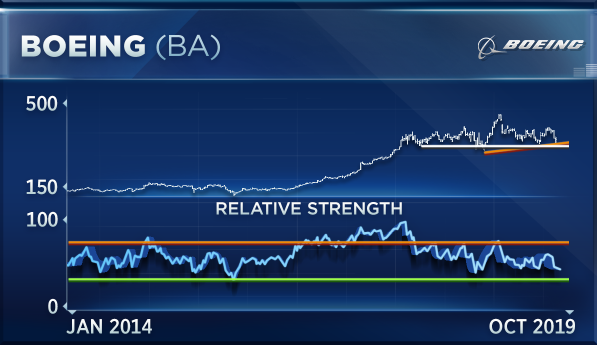 “Getting under [$320] would be a larger negative” for Boeing, Newton said, adding that the stock is still in recovery mode after an overbought rally that took it from around $100 in early 2016 to around $450 early last year.

“I think the stock just got substantially overbought, and, technically, it’s not a great sign to get so overbought and then gradually start to roll over,” he said. “So I’m a little more bearish on Boeing in the months and years to come, I think into 2022. But … 320 is going to be a key level.”

Caterpillar shares didn’t look “too attractive” to Newton here, either.

“The stock has really been falling for the last 20 months, but if anything, the decline has been pretty mild compared to how the stock had risen prior to the pullback,” he said, citing a chart. 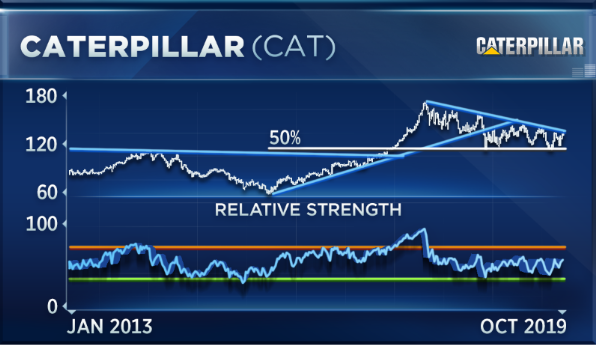 “It’s given back about 50% of the bigger range. I don’t view that as too much of a negative,” Newton said. “If it gets over 135, that would actually be a pretty good positive for this stock in thinking it could finally play catch-up to stocks like Deere in the machinery space which have been substantially stronger. So, right now, CAT has been a laggard, but it’s tough to pin this on tariffs, I think, just because it peaked out largely about 20 months ago.”

Boeing is up nearly 6% year to date, while Caterpillar is up almost 7%.

Search Engine Optimization “SEO” is the science of enhancing a website’s ranking in search engines, thus boosting traffic to that website – Visit The Online Publishers TOP online marketing to reach out to SEO experts.

3 Ways TOP Platform Can Help You With Online Lobbying.

4 Ways TOP Can Help You Handle Your Press Release.

4 Reasons To Go With TOP When You Need Online Reputation Building Solutions.

5 Reasons You Should Consider Doing Translation Work For TOP.

For Advertisers To Make More TOP Is The Answer.