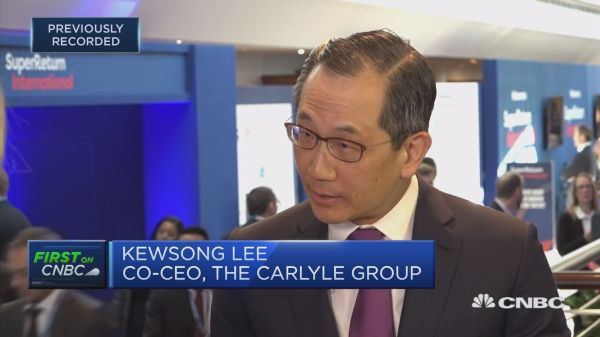 There will not be a recession this year despite a slowdown in economic activity worldwide, a top executive at Carlyle Group told CNBC Wednesday.

Global growth has lost some steam compared to last year, with the International Monetary Fund (IMF) downgrading its forecasts for this year. At the same time, geopolitical risks have grown, from trade wars to political instability in Europe. As a result, many have started wondering whether the world economy will enter recession this year.

“I think that what we see is enough global momentum that there isn’t going to be a recession in 2019,” Kewsong Lee, co-CEO of The Carlyle Group told CNBC’s Annette Weisbach.

“But I must say the way we see it, global growth is moderating but it is not stalling,” he said.

The IMF projected in January a 3.5 percent growth rate worldwide for 2019 and 3.6 percent for 2020. These were 0.2 and 0.1 percentage points below its last forecasts in October — making them the second downward revision in three months.

“The rate of growth is slower this year than it was last year at this point in time but there is enough momentum that we see us getting through 2019 without a recession. Obviously thereafter it depends a lot on what happens with policy and geopolitical events and how the corporate CEOs are thinking about investing,” Lee said.

At the time, the IMF mentioned a number of risks that could bring economic growth further down. These included Brexit, further slowdown in China, global trade tensions and high levels of government debt.

“There is a lot of volatility right now, people are uncertain exactly what the rules of the game will be, but folks are starting to pause a little bit to say where should we be spending money and how aggressively should we be investing,” Lee added.