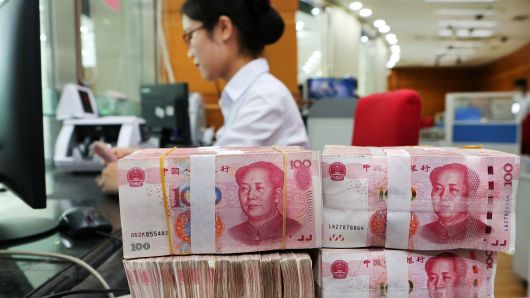 U.S. negotiators are reportedly demanding China not devalue the yuan as a condition for any potential trade deal. Such a measure is likely to encounter little resistance from the Chinese: It’s actually in Beijing’s interest to have a stronger currency, experts told CNBC.

The yuan’s exchange rate against the dollar has been a repeated complaint from Donald Trump. In July of last year, the U.S. president told CNBC that the Chinese currency had been “dropping like a rock” and that it was putting America at a “disadvantage.”

Since then, the yuan has strengthened about 1 percent against the greenback and Beijing has said the People’s Bank of China is pursuing a stronger currency.

“The risk of Beijing engaging in CNY devaluation is an overstated, if not imagined, risk.” -Vishnu Varathan, Mizuho Bank head of Economics and Strategy

That reportedly hasn’t stopped the White House from seeking assurances there’d be no devaluation, but that American pursuit for yuan stability is “superfluous,” according to Mizuho Bank Head of Economics and Strategy Vishnu Varathan.

“Fact is, the PBoC is also after a stable CNY,” he said, using the three-letter abbreviation for the Chinese yuan (which is also called the renminbi, or RMB).

The world’s second-largest economy has been on a drive to open up its financial sector, and has also been pushing for more international use of the yuan. So, it’s already in China’s interest to maintain currency stability as Beijing opens domestic markets up to international investment, said Tuan Huynh, emerging markets chief investment officer at Deutsche Bank Wealth Management.

“The idea of CNY devaluation as a (mercantilist) strategy is not only outdated, but is also misguided,” Varathan said. “Beijing’s struggle at the margin is to prevent abrupt and excessive slide in the CNY (brought about by US-China trade risks, which in turn could trigger capital outflows and asset market wobbles).” Editor’s note: Varathan included the above parentheses in his emailed comments to CNBC.

“The risk of Beijing engaging in CNY devaluation is an overstated, if not imagined, risk,” he said.

Chinese authorities also dismissed such concerns in a press conference on Wednesday, following Bloomberg’s report that sources familiar with the trade negotiations said Trump’s team is asking China to keep the yuan stable.

“First, China, as a responsible major country, has made clear its position repeatedly that it does not engage in competitive devaluation. Second, we will not use the RMB exchange rate as a tool amid trade disputes,” said Chinese Foreign Ministry spokesman Geng Shuang.

He added: “Third, we hope the US can respect law of markets and objective facts, and refrain from politicizing exchange rate issues.”

Jameel Ahmad, global head of currency strategy and market research at foreign exchange broker FXTM, echoed that sentiment, saying the idea of a Chinese devaluation is not worthy of attention “in the current day and age.”

If anything, he added, a neutral observer would expect Beijing’s “preference would be for strength in the Chinese currency, because of the impact this can have on risk appetite and emerging market sentiment.”

China sets a trading range for the yuan each day, meaning the currency is not free-floating like the U.S. dollar or the euro.

Still, buying and selling pressure — in both mainland “onshore” markets and international “offshore” markets — are said to influence the daily trading band decision from the PBOC.

The onshore yuan traded at about 6.71 to the dollar on Thursday.

While the U.S. and Beijing may both want a more stable yuan, they can’t perfectly control the market forces influencing the exchange rate, experts stressed.

In fact, the tariff battle between Washington and Beijing may have spurred investors to seek safe haven in the U.S. dollar, consequently making the greenback stronger against the yuan.

“It has been clear for all to see over the last year that trade tensions have acted like a magnet for investors to stock up on Dollar positions as a safe haven,” said Ahmad.

“If the persistent trade tensions would find a long-standing resolution, the Dollar would be less attractive and investor appetite in emerging markets would increase,” he added.

There’s been a mysterious surge in $100 bills in circulation, possibly linked to global corruption. To more vatnplus.com
Weizhen Tan