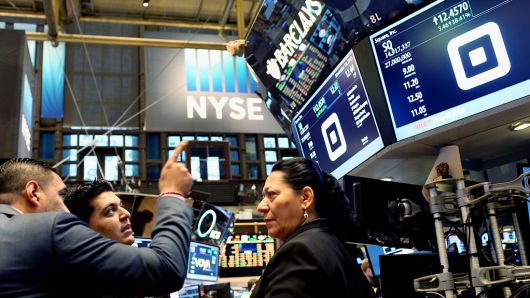 Raymond James is telling investors to scale back their positions in payments company Square.

The firm downgraded the stock to “underperform” from “market perform,” citing a lack of growth opportunities on the horizon and its move into banking as a negative catalyst for the stock.

“We believe organic growth peaked in 3Q18 and growth on the all-important subs and services line will likely materially decelerate in 2Q19,” Raymond James analyst John Davis said in a note to clients Tuesday. “We believe the risk/reward is negatively skewed and recommend investors reduce positions.”

The firm has a $56 fair value price for Square’s stock — roughly 27 percent below where it closed on Monday. The stock has been on a tear over the past year, up 61 percent from last January. In 2019 alone, it’s up 30 percent.

Raymond James is also bearish on Square’s move into banking. The fintech company re-filed its application for an industrial loan company charter in December after pulling it earlier in the year to answer questions from regulators. The move would allow Square to operate without going through outside banks and intermediaries. If approved, Square would also get access to a coveted feature of the banking world — deposit insurance.

Square is best known for its credit-card processing hardware. But it also has a popular peer-to-peer payment app, the Cash App, has moved into small business lending through Square Capital, and debuteda debit card for small businesses earlier in January.

Revenue upside from some of its newer products is “likely to prove more difficult” this year though, and the fintech company will have to rely on its core businesses, according to Raymond James.

“We believe revenue upside will likely be more muted this year as subs and services will likely once again need to be the driver of significant upside,” Davis said.