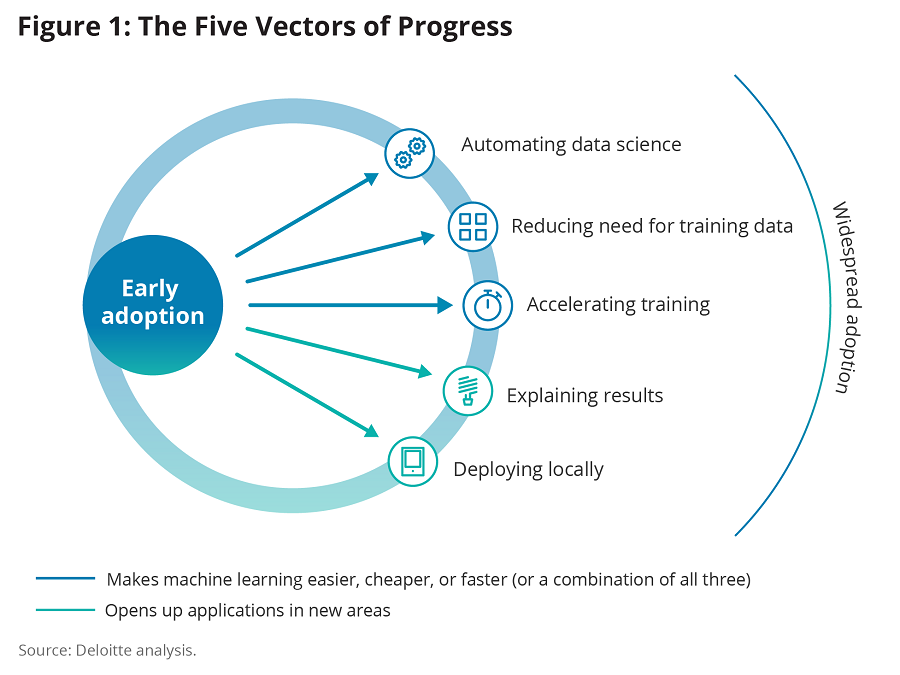 Blockchain and the five vectors of progress

For most companies, the value of blockchain is still more potential than actual. But barriers to adoption are falling, helping to resolve key issues and bring the technology into the mainstream.

Blockchain technology continues to inspire widespread enthusiasm. Business leaders across industries see its potential to streamline business processes, enable new business models, and potentially reshape industries. But for most enterprises, obstacles have kept the value of blockchain more prospective than actual, and commercial adoption thus far remains limited. As the technology continues to mature, progress along five vectors can help mitigate or topple existing barriers to adoption—and bring blockchain closer to the mainstream.

Multiple barriers to the adoption of blockchain technology

Analysts widely expect blockchain technology to one day have a significant impact on business. Effectively incorporated, the technology has the potential to improve efficiency and effectiveness, cut costs, and increase revenue by helping to create new products, services, and business models. This promise has led many companies to invest time and resources in blockchain pilot projects. In fact, analysts forecast enterprise spending on blockchain to double year over year, to US$2.1 billion in 2018.

However, unresolved issues are keeping many enterprises from adopting the technology. In a recent survey, only 9 percent of CIOs agreed that their organization has either implemented blockchain-related projects or plans to within a year.

One major reason: As a means of processing transactions, blockchain-based systems are comparatively slow. Blockchain’s sluggish transaction speed is a major concern for enterprises that depend on high-performance legacy transaction processing systems. A lack of standards and interoperability between various blockchain platforms and solutions is another challenge. Unless blockchain technology can be readily connected to existing enterprise systems, it will be of little utility in large programs and initiatives. Legal and regulatory concerns around data privacy, intellectual property, enforceability of contracts, and choice of jurisdiction are inhibiting the technology’s adoption. And businesses are constrained by blockchain’s technical complexity, which limits the feasibility of implementing distributed ledger systems.

Progress in five areas can help overcome barriers to adoption

There is good news for blockchain enthusiasts: Progress is being made in addressing these obstacles. Deloitte has identified five key vectors of progress that could drive wider adoption of blockchain. Three of these vectors—increase in transaction speeds, standards and interoperability, and ease of implementation—enhance technical feasibility. The other two—regulatory advancements and expansion of consortia—help broaden the technology’s applicability to a greater number of use cases and industries.

But developers are working on a promising way to close this performance gap: They are developing new consensus mechanisms. Consensus is how participants in a blockchain network come to agree that the transactions recorded in the digital ledger are valid. The consensus mechanism popularized by the bitcoin blockchain enables participants to trust the validity of the transactions even if they do not trust each other. This magic comes at a cost of sluggish performance and exorbitant use of computational resources entailed in the proof-of-work mechanism it uses.

Newer consensus mechanisms promise significantly higher performance. They achieve this with designs that reduce or eliminate time- and energy-intensive mining and reduce the number of nodes that must validate a transaction for it to be considered final. Each of the emerging consensus mechanisms has advantages and disadvantages that make them better or worse for certain applications. Considering the diversity of applications for blockchain, this is actually a good thing: Applications can choose the tradeoffs in performance, functionality, and security that are appropriate for the application.

These mechanisms can bear exotic names such as Practical Byzantine Fault Tolerance, Federated Byzantine Agreement, and Delegated Proof of Stake and are being used by prominent blockchain platforms including Hyperledger, Stellar, and Ripple. The Ethereum platform is moving toward a hybrid consensus mechanism that combines proof-of-work mining with a proof-of-stake system intended to motivate trustworthy behavior in the network. In a proof-of-stake system, only participants that can show they own a certain number of cryptocurrency assets—and therefore have a stake in the reliable functioning of the system—are able to validate transactions. Sharding, a means of accelerating the consensus process by allowing nodes to work in parallel, is also coming to Ethereum; upstart Zilliqa has announced a live implementation of sharding that it claims can process some 2000 transactions per second.

A lack of standards grants blockchain coders and developers freedom—and can give IT departments headaches as they discover that platforms can’t communicate without translation help. According to a Deloitte study, the cloud-based code repository GitHub features more than 6,500 active blockchain projects that use diverse platforms with multiple coding languages, protocols, consensus mechanisms, and privacy measures.

Standardization could help enterprises collaborate on application development, validate proofs of concept, and share blockchain solutions as well as make it easier to integrate with existing systems. Help is on the way as a growing number of industry participants work to enable cross-blockchain transactions, interconnectivity, and standardization.

For instance, last year the Enterprise Ethereum Alliance was founded to create a standard version of Ethereum blockchain software for business. As of July 2018, the alliance had nearly 600 members. Membership in the Hyperledger Foundation, an open-source collaborative effort created to advance cross-industry blockchain technologies, has reached 250 organizations. One of the projects supported by the Foundation is the Interledger protocol, a means of routing payments across different ledgers that may be based on diverse technologies.

Another standardization effort gaining traction is the Decentralized Identity Foundation, a consortium formed to promote standards for blockchain-based identity systems. Such systems may eventually enable new business models as well as new ways of administering public services. Membership in that consortium has reached nearly 60 organizations so far.

“The nice thing about standards,” quipped computer scientist Andrew Tanenbaum, “is that you have so many to choose from.” Certainly, there are multiple blockchain standardization efforts under way. But there are also many facets to the technology, and innumerable industry-specific issues that will each require their own standards. The efforts we are seeing represent a vector of progress for blockchain technology.

The costs and complexities involved with building and deploying blockchain solutions are significant obstacles to the adoption of the technology. To address these challenges, nearly a dozen big technology vendors—including Amazon, IBM, and Microsoft—now provide cloud-based blockchain technology as a service. New cloud offerings have been coming to market at an accelerating pace and have the potential to lower the barriers to developing and operating blockchain networks. Cloud providers are releasing blockchain templates intended to automate the setup of basic blockchain infrastructure; vendors claim this can reduce application development from months to days. They are also partnering with developers of blockchain-building tools to ease development. For instance, Google and the startup Digital Asset announced a partnership to make Digital Asset’s blockchain-building tools easily accessible in Google’s cloud.

Besides the cloud, new software platforms are aiming to ease the development and deployment of blockchain applications. For example, the open-source Sawtooth platform has a modular design that separates the core system from application-specific functionality, hiding complexity from developers. It also allows developers to create apps in their preferred language, such as JavaScript and Python, without worrying about the underlying technology.

There is a clear trend toward easier-to-use blockchain tools and platforms. This vector of progress is likely to foster greater adoption of blockchain technology over time.

Regulatory issues are another major barrier to blockchain adoption. In a recent Deloitte survey of blockchain-savvy executives, nearly two in five cited regulatory issues as a barrier to greater investment in blockchain technology. The reason for this is that the technology introduces concepts and methods, such as cryptographic signatures and smart contracts, that existing regulations don’t address. In some cases, applications for the technology run counter to the practices those regulations envision. For instance, some organizations are exploring the use of blockchain for securely sharing patient medical records, with access to the records under patient control. But under Health Insurance Portability and Accountability Act rules, many disclosures of personal health information require that the recipient enter into a business associate agreement, a process fundamentally at odds with a blockchain model.

Addressing these issues requires official action—and we are starting to see it. This year alone, some 17 US state legislatures have considered and passed dozens of bills pertaining to the adoption of blockchain technology. These bills cover areas such as the recognition of cryptographic signatures, the definition and use of smart contracts, and the use of blockchains for maintaining business records. Meanwhile, the US Congress Joint Economic Report of 2018 endorsed blockchain and calls for a common and coordinated regulatory framework that creates clarity for developers. And regulators such as the US Financial Stability Oversight Council, a government body that assesses financial system risks, and the US Federal Trade Commission have formed working groups to examine the ways in which the technology will affect their objectives.

There is a lot of work still to do before the major regulatory hurdles to blockchain adoption are cleared. But momentum is building. Continued progress here is a vector of progress that will help to increase  adoption of blockchain technology.

Financial companies took the lead in launching blockchain consortia, and they’ve maintained enthusiasm. For instance, R3, which is building blockchain technology for the financial industry, leads a consortium whose membership has grown from 42 in 2015 to over 200 in 2018. In the risk management and insurance domain, 30 companies so far have joined the Riskblock consortium to collaborate on blockchain applications to lower transaction costs while increasing the speed and security of data transfers among participants in the network.(Deloitte is playing an active role in this consortium’s establishment and management.)

Firms outside financial services are forming consortia of their own, such as the Blockchain in Transport Alliance that includes leading players from the logistics sector and the MediLedger blockchain platform on which major players of the life-sciences sector are collaborating to keep counterfeit goods out of medical supply chains. Even policymakers, regulators, and central banks are beginning to join or found and lead blockchain consortia. In the aforementioned executive survey, 29 percent of respondents said their company was already participating in a blockchain consortium and another 45 percent said they were likely to join one.

Not all consortia are building applications, and not all are equally effective. But growing participation by enterprises, technology providers, regulators, and governments is a vector of progress in the development of blockchain that will help increase adoption of the technology.

Over time, the five vectors of progress outlined here may help enterprises lower the cost and risk of deploying blockchain while expanding the practical applications of the technology.

Companies should keep an eye on emerging consensus mechanisms and techniques that could increase their transaction speeds exponentially. Developers of blockchain platforms and solutions should intensify their efforts to increase interoperability between ledgers and their connectivity with existing systems in the application landscape. As the vendor landscape for blockchain-as-a-service evolves further, the complexity of applying blockchain-based solutions will likely ease. Companies already have a wide array of options to help implement blockchain. They can evaluate these alternatives and choose the option most closely aligned to their needs.

Though regulatory understanding of the technology is still nascent, firms can collaborate with lawmakers and policymakers to create a solid regulatory framework—and perhaps look at leveraging policymakers’ experimental facilities. Finally, companies should look at creating an ecosystem of partners in order to derive maximum value from this collaborative technology.

It’s understandable why, despite promising pilots and experiments, executives might wonder when—and even whether—blockchain will be ready for mass adoption. But progress along these vectors is bringing the technology closer to its breakout moment every day.